These are the heartbreaking stories Cleveland fans grew up hearing about—even if we were too young to have witnessed them.  These were the stories that shaped generations of Northeast Ohioans—even if we didn’t always understand why.

I vividly recall the 1997 World Series loss—we were actually the favorites to win that time.  The Cleveland Indians in the 90s were spectacular.  Thome.  Vizquel.  Lofton.  The list goes on and on.  Everything imploded in the 9th inning of Game 7 and an expansion team that hadn’t even been around that long came away with a World Series victory.  I began to cry and excused myself to be alone.  My father quietly came into my room and said that Cleveland teams will break your heart—but this is our home team, these are our guys no matter what.  In Northeast Ohio nothing is given, everything is earned. One day we will be champions, one day.  But you gotta believe and take heart.

Living outside of Boston for eight years, some bitterness seeped into my heart.  Don’t they realize how good they’ve had it here?  Yes, the Red Sox went so long without a World Series.  But these New Englanders had the dominance of Larry Bird and the Celtics to get them through.  And sure, the Patriots used to be terrible—but now they’re one of the elite teams in the NFL.  I found myself cringing when flying out of Logan Airport at the Championship Banners displayed.  Since 1964 the Celtics have won 10 NBA Championships, the Patriots have won 4 Super Bowls, and the Red Sox have won 3 World Series.  Since 1964.  A local sportscaster condescendingly shared these statistics recently under the heading of Boston as a “Title Town”—and those losers in Cleveland have won nothing, nada, zip, zilch since 1964 was the implication.

Yes, bitterness seeped in.  I’m an Ohioan living in Massachusetts.  I remain that Midwestern girl and diehard Cleveland sports fan.  Our family had Cleveland Browns season tickets for decades.  My grandfather said he wouldn’t die until the Browns finally won a Super Bowl.  Grandpa passed away on February 20, 2016—just a few months ago. 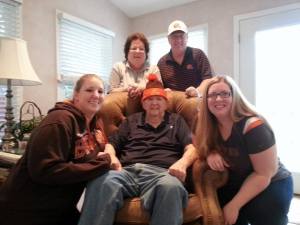 Going into this 2016 NBA Finals, I kept asking—when will our championship drought finally be over?  When will it finally be our time?

The narrative changes today.  Now we no longer just have Red Right 88, the Drive, the Fumble, the Shot, the Move, those World Series losses, or the Decision.  Now we have the Block.  And we have the Shot that went our way this time.  We have our guy, one of our very own—LeBron James—on the ground crying tears of joy for bringing the championship home.

We always take the tortured road in Cleveland sports.  Our guy was always the one on the ground in defeat at the end of the game in my lifetime.  Until now.  My mother kept telling me that the Cavs would make history in my moments of doubt.  To break our 52 year championship drought—of course we would have to make history.  Ohioans wouldn’t have it any other way.  Now mothers and fathers will tell their children that in Northeast Ohio nothing is given, everything is earned.  And guess what?  Sometimes you will defy the odds.  Sometimes you will make history.  Because remember when our Cavs came back to win it all in 2016?